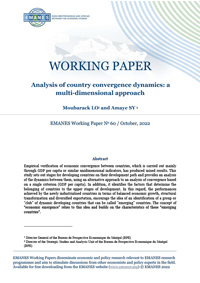 Empirical verification of economic convergence between countries, which is carried out mainly through GDP per capita or similar unidimensional indicators, has produced mixed results. This study sets out stages for developing countries on their development path and provides an analysis of the dynamics between them, using an alternative approach to an analysis of convergence based on a single criterion (GDP per capita). In addition, it identifies the factors that determine the belonging of countries to the upper stages of development. In this regard, the performances achieved by the newly industrialised countries in terms of balanced economic growth, structural transformation and diversified exportation, encourage the idea of an identification of a group or “club” of dynamic developing countries that can be called “emerging” countries. The concept of “economic emergence” relies to this idea and builds on the characteristics of these “emerging countries”.