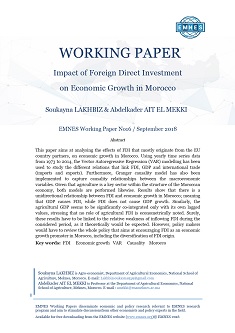 This paper aims at analysing the effects of FDI that mostly originate from the EU country partners, on economic growth in Morocco. Using yearly time series data from 1973 to 2014, the Vector Autoregressive Regression (VAR) modelling has been used to study the different relations that link FDI, GDP and international trade (imports and exports). Furthermore, Granger causality model has also been implemented to capture causality relationships between the macroeconomic variables. Given that agriculture is a key sector within the structure of the Moroccan economy, both models are performed likewise. Results show that there is a unidirectional relationship between FDI and economic growth in Morocco; meaning that GDP causes FDI, while FDI does not cause GDP growth. Similarly, the agricultural GDP seems to be significantly co-integrated only with its own lagged values, stressing that no role of agricultural FDI is econometrically noted. Surely, these results have to be linked to the relative weakness of inflowing FDI during the considered period, as it theoretically would be expected. However, policy makers would have to review the whole policy that aims at encouraging FDI as an economic growth promoter in Morocco, including the diversification of FDI origin.