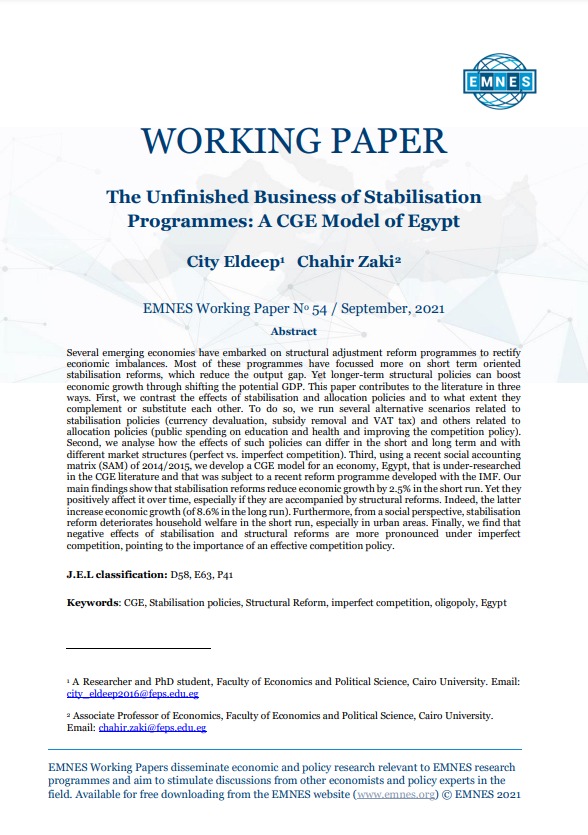 Several emerging economies have embarked on structural adjustment reform programmes to rectify economic imbalances. Most of these programmes have focussed more on short term oriented stabilisation reforms, which reduce the output gap. Yet longer-term structural policies can boost economic growth through shifting the potential GDP. This paper contributes to the literature in three ways. First, we contrast the effects of stabilisation and allocation policies and to what extent they complement or substitute each other. To do so, we run several alternative scenarios related to stabilisation policies (currency devaluation, subsidy removal and VAT tax) and others related to allocation policies (public spending on education and health and improving the competition policy). Second, we analyse how the effects of such policies can differ in the short and long term and with different market structures (perfect vs. imperfect competition). Third, using a recent social accounting matrix (SAM) of 2014/2015, we develop a CGE model for an economy, Egypt, that is under-researched in the CGE literature and that was subject to a recent reform programme developed with the IMF. Our main findings show that stabilisation reforms reduce economic growth by 2.5% in the short run. Yet they positively affect it over time, especially if they are accompanied by structural reforms. Indeed, the latter increase economic growth (of 8.6% in the long run). Furthermore, from a social perspective, stabilisation reform deteriorates household welfare in the short run, especially in urban areas. Finally, we find that negative effects of stabilisation and structural reforms are more pronounced under imperfect competition, pointing to the importance of an effective competition policy.