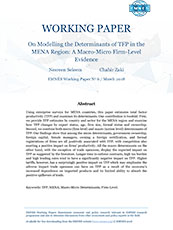 Using enterprise surveys for MENA countries, this paper estimates total factor productivity (TFP) and examines its determinants. Our contribution is twofold. First, we provide TFP estimates by country and sector for the MENA region and examine how TFP changes by export status, age, firm size, formal status and ownership. Second, we combine both micro (firm level) and macro (nation level) determinants of TFP. Our findings show that among the micro determinants, government ownership, foreign capital, female managers, owning a foreign certification, and formal registrations of firms are all positively associated with TFP, with competition also exerting a positive impact on firms’ productivity. All the macro determinants on the other hand, with the exception of trade openness, display the expected impact on TFP as suggested by the literature. Longer time to enforce contracts, high tax burden and high lending rates tend to have a significantly negative impact on TFP. Higher tariffs, however, has a surprisingly positive impact on TFP which may emphasize the adverse impact trade openness can have on TFP as a result of the economy’s increased dependence on imported products and its limited ability to absorb the positive spillovers of trade.