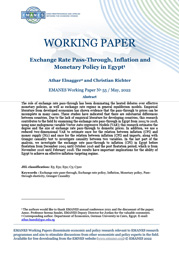 The role of exchange rate pass-through has been dominating the heated debates over effective monetary policies, as well as exchange rate regime in general equilibrium models. Empirical literature from developed economies has shown evidence that the pass-through to prices can be incomplete in many cases. These studies have indicated that there are substantial differences between countries. Due to the lack of empirical literature for developing countries, this research contributes to the field by examining the exchange rate pass-through in Egypt from 2005 to 2018, using nine endogenous variable Vector Auto-regressive Models (VAR); this research estimates the degree and the size of exchange rate pass-through to domestic prices. In addition, we use a reduced two-dimensional VAR to estimate once for the relation between inflation (CPI) and money supply (M2) and once for the relation between inflation (CPI) and imports, along with Granger causality test to investigate causality between two variables. In the last part of the analysis, we investigate the exchange rate pass-through to inflation (CPI) in Egypt before floatation from December 2005 until October 2016 and the post floatation period, which is from November 2016 until February 2018. The results have important implications for the ability of Egypt to achieve an effective inflation-targeting regime. 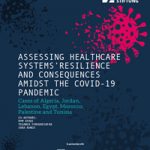 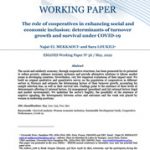 The role of cooperatives in enhancing social and economic inclusion: determinants of turnover growth and survival under COVID-19